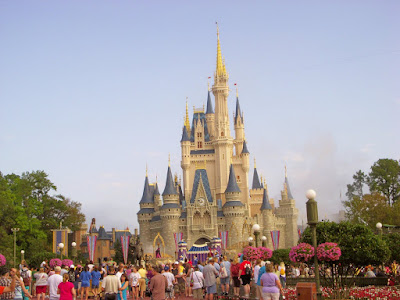 We have returned in one piece from the "happiest place on Earth" full of stories, fun, and family. As the Big Guy put it "This kid has been by my side for 7 days straight!". The kids love to spend so much time with him outside of the distractions of home and work and really took advantage of it...mom was left out in the cold. Yep, chopped liver.

As we flew home, I concocted some awards that should be given out for this vacation. 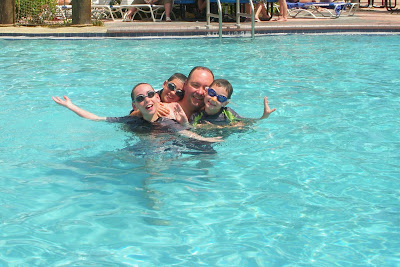 It has to go to the Big Guy. I have to admit, I was worried and not sure he had it in him to really "do Disney". He is usually in class, since we go during conference, and catches up with us at the end of the day. I didn't think he would be able to get up early, eat lunch on a bench, walk 5 miles per day, and stand in long lines while entertaining kids for a whole week (all without a beer in his hand). But, he surprised all of us and really rose to the occasion. This award is for you, Big Guy.

The award for ruining the most pictures... 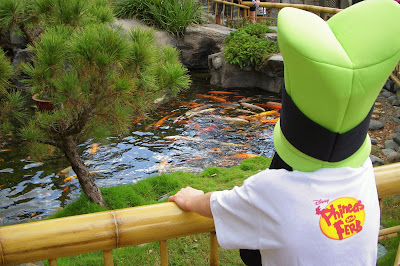 This award is presented to the "damn hat". The peacemaker has been planning to get this Goofy hat for a souvenir since our trip to Disney last year and couldn't wait to get his grubby little hands on it. Once he had it, he never took it off...the...whole...trip...

This giant, green, tacky hat single-handedly ruined more pictures this trip than I ever dreamed possible. "Damn hat", this one's for you.

This award will be awarded to the top two favorite family pictures from the trip. I present to you Tower of Terror:

Hey! Down in front, lady! Can't you see we're trying to get a family picture here?!? 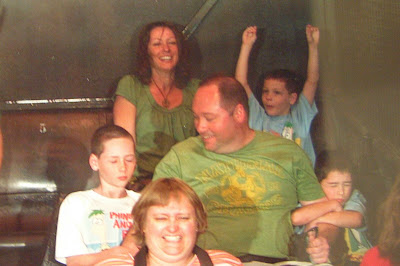 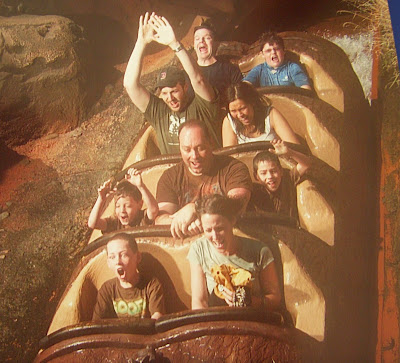 Most unfortunate place for a ride to break down... 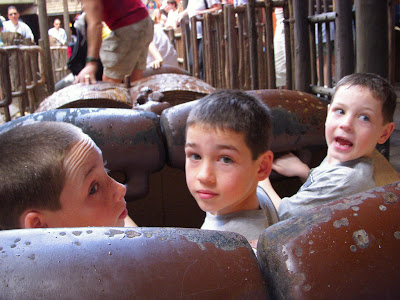 Ironically, Splash Mountain wins this award also. Have you ridden this ride? Do you remember that the funny little twist is that you don't get wet on your way down the flume, you get wet watching the boat next to you go down the flume. Ha. Ha. Ha.

Yeah, so our ride broke down at 9:30 am on our second ride of the day at the base of the first hill - through three revolutions of boats and we just kept getting wetter and wetter and wetter. My phone broke, our lunch was soggy, my camera dripped, and I looked like someone had lifted me from the boat and swished me around in the river for a bit before sending me on my way. Oh, did I mention I was wearing khaki Bermuda shorts that took about 3 hours to dry? Did I? Yeah, Splash Mountain, suck it.

Most touching attraction that became the most boring... 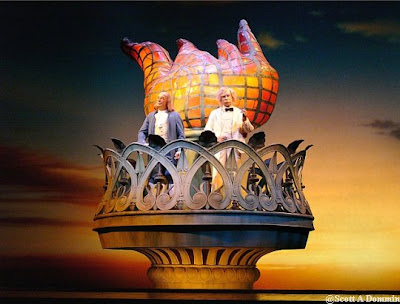 This award goes to America in Epcot. We entered this huge building with the most amazing acoustics to hear costumed "cast members" singing a gospel version of Battle Hymn of the Republic that gave me goosebumps and brought me to tears (patriotic songs and hymns make me cry...this was beyond!). It was the single best moment of the entire trip, entertainment-wise.

Fast forward to the actual presentation (the song was just to entertain us while we waited in line). We sat in a beautiful auditorium, the lights dimmed, and animated figures acted out America's history...for...ever...

The Big Guy, #1 son, and Helper Munchkin were out like a light while The Peacemaker and I tried to figure out how this decision went so wrong?!? Where's the happy, the fun? How the hell do we get out of here and when does it end? America, whatever.

The most funnest place we ever stayed (according to Helper Munchkin)...

This award goes to the Marriott Harbor Lake. We have traveled quite a bit with these three kids and I have to say, whoever is in charge at that resort really has it going on.

At check-in we were handed a calendar for the week that was chock-ful of activities for families and children, from hula hooping contests, to DJ's, to an organized capture the flag game, to sundae bars, to mini-golf, to limbo contests...I could go on and on. We are definitely going to stay there again. 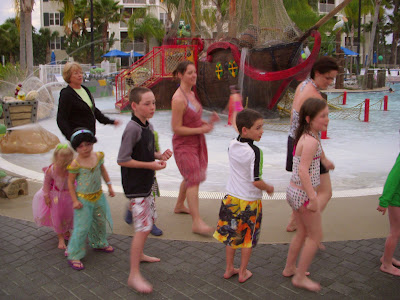 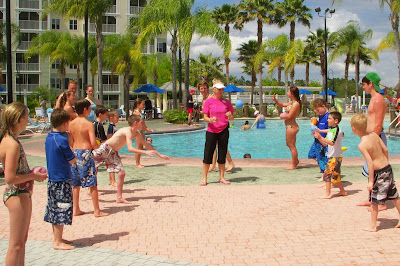 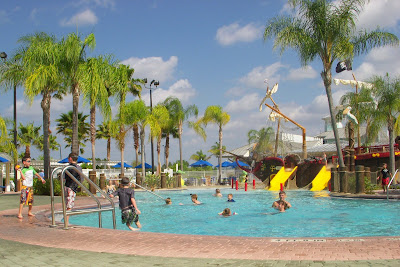 We had an amazing time at our resort when we stayed home from the parks. The kids were entertained, the pool was fantastic, and the Big Guy and I relaxed. A+

The award for the most amazing thing I've ever captured on my cell phone camera... 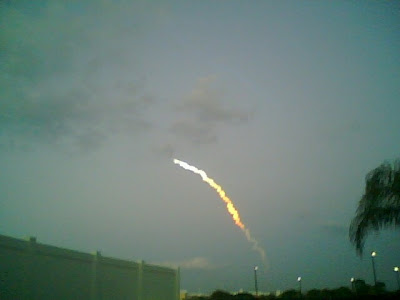 We were able to view our first shuttle launch one evening at the pool. They had the blast off on the TV at the bar which we watched then looked to the right and saw it rising in the sky. It was a sight to see, and I was awestruck to the point of almost forgetting to take a picture! My cell phone was handy, so I clicked before it disappeared altogether.

**sidenote: the Big Guy was mixing a drink in the room and missed the whole thing. He was mucho bummed.

The winners are Chinese Relaxation Balls (yeah, I don't know either.) 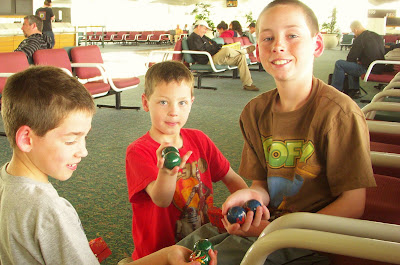 and also, the largest souvenir... 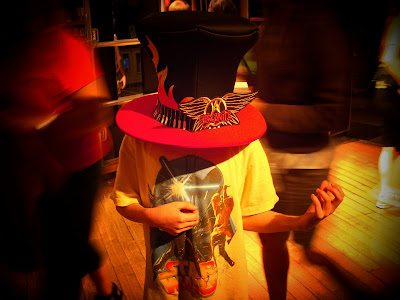 this giant Aerosmith, Rockin' Roller Coaster hat that #1 son just HAD to have takes the cake. It actually transformed his personality when he wore it, I'm kind of afraid of it.

When he wore this hat, the usually shy kid became an extroverted head-banger who flashed the "rock and roll" gesture to complete strangers while nodding his head in a strange way. It was creepy.

And finally, the most hilarious comment made by a Disney "cast member" in complete seriousness...

When the Big Guy asked about the "20% of novelty hats" sign in a booth, the man responded "Yes, sir, all of our novelty headgear is 20% off. That, of course, does not include our Mickey Mouse hats, however, because they are considered essential headgear." We started giggling and he looked at us straight-faced with a puzzled look. Whoa. 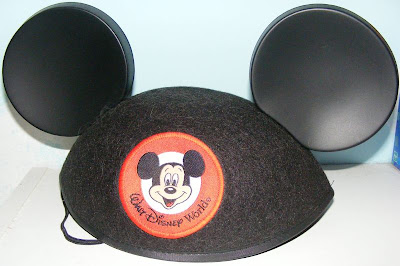 Here are a few of my favorite shots from our vacation. Enjoy! 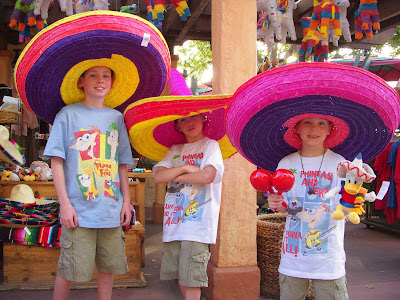 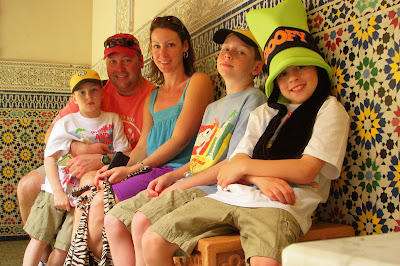 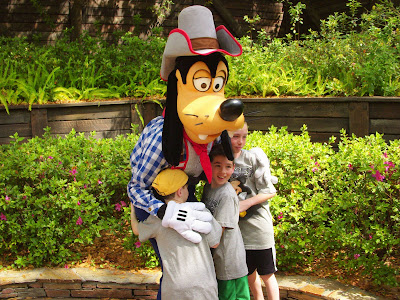 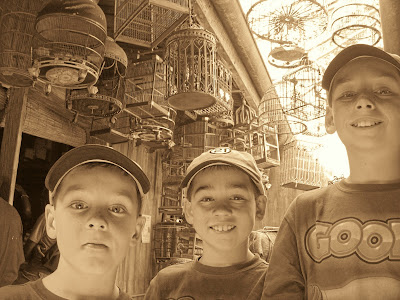 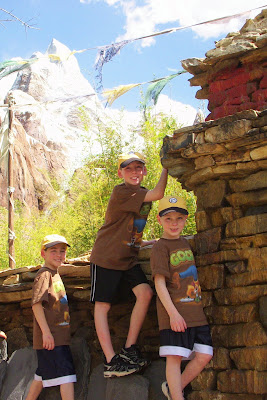