My kids begin to plan for Halloween about one week after the last Halloween. We have gone through many ideas, but these are the ones we've stuck with for this year.

My oldest son wanted to be something unexpected and tongue-in-cheek, so he chose Lady Gaga in a meat dress...of course. I searched high and low for fabric resembling meat and finally settled on an irregular red stripe (I believe it was supposed to be wood grain) at JoAnn's.

I referenced this photo: 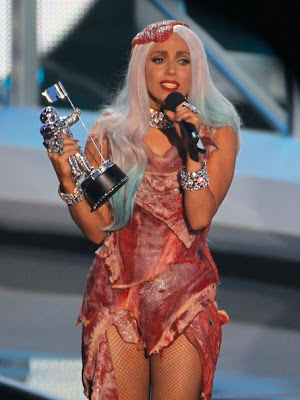 and made this dress out of a series of jagged triangles that I sewed together haphazardly: 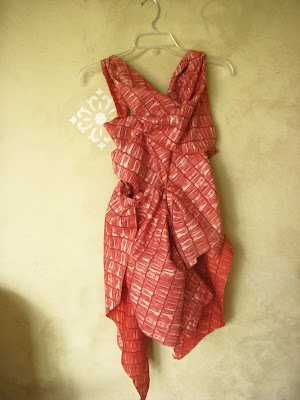 24 hours before this weekend's costume contest, he suddenly felt uncomfortable wearing a dress yet still wanted to be GaGa. It's time for Walmart, doggy toys and some imagination: 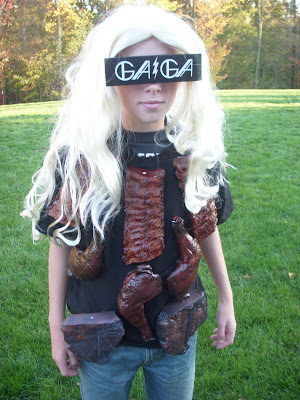 We hot-glued various meaty squeak toys (steaks, chicken legs, ribs) onto a clearance t-shirt, added the GaGa glasses, and a wig and he was good to go. I actually think what we ended up with was more ridiculous and more GaGa!

My youngest son was torn this year..."Do I want to be scary or something I love?" He really loves donuts. Really. In fact, he wrote me a whole Mother's Day card this year all about how much he loves donuts. I'm jealous of donuts now.

We decided to combine the two and make him a "Krispy Skreme" zombie with a big moldy donut: 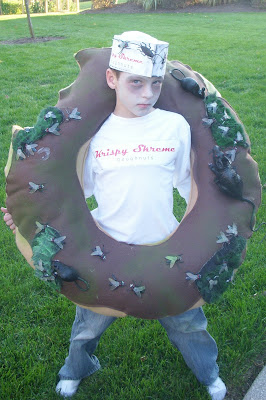 There are many great tutorials for making felt donuts if you google them. But here is what I did: I cut out the round shape from tan felt, and another of brown felt (for the chocolate). Then I cut out the middles. I cut the chocolate more wavy, like icing, then sewed it to one of the donut rounds with my machine.

Then, I put right sides together and sewed around the outside edge of the donut, then turned right side out.

Next, I whip stitched the inside of the donut hole, leaving a 6 inch space un-sewn so I could fill the donut with quilt batting.

After I stuffed the donut I sewed the opening closed by hand.

We hot glued on patches of faux fur that we spray panted green and gray for mold, then added several bugs and rats to make it look really disgusting. 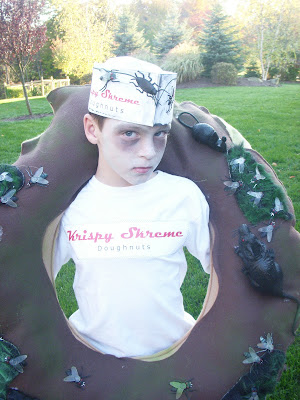 We got a hat from Krispy Kreme and rubbed paint on it and changed the name to "Krispy Skreme" using Magneto font on the computer and glued the new name over the old. We hot glued on several bugs and creepy crawlies.

The t-shirt used the same paper logo I printed out on the computer and sewed onto the shirt using a zigzag stitch. It's temporary and I can use the shirt again!

Thank goodness my middle son wanted to buy a costume this year... 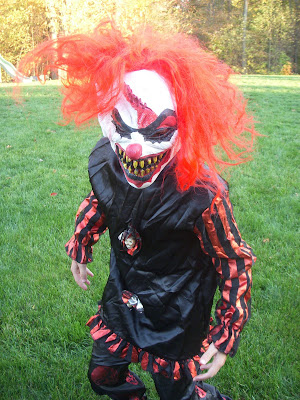 You are going to die when you see my costume this year...it's a surprise though. I can't show you until AFTER Halloween!